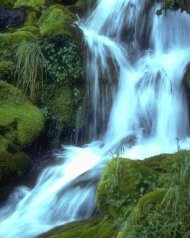 Many of us live and work in surroundings dominated by technology; computers, televisions, copy machines, printers, microwave ovens, air conditioners and heaters, just to name a few. Click for Larger Image of a Salt Crystal Lamp on a Computer Desk These so called “conveniences” emit an excessive amounts of positive ions into the air we breath, which can result in mental and physical exhaustion and effect overall wellness. The most DANGEROUS levels of positive ions occur in POLLUTED CITIES. Exhaust fumes from cars, trucks, and buses; factory smoke, cigarette smoke, dust and soot, and electromagnetic pollution all combines to create a potent mixture of POSITIVE IONS and OZONE that gradually destroys our lungs and ruins our health.


Waterfalls are an excellent source of cleansing negative ions Perhaps you have noticed that your feeling of well being is intensified in pure mountain air, or at the seashore, or after a thunderstorm. This is due to the higher concentration of negative ions in these surroundings. It is no coincidence that healing spas are, as a rule, located in areas with foaming salt water or roaring mountain springs which generate plentiful negative ions which causes air particles to achieve electrical or ionic balance.

Salt crystal lamps are highly suitable for daily use in the whole house. In bed rooms, in living rooms, in dining rooms, in the hall way, in meditation rooms, near televisions, computers and around smokers. Use these beautiful lamps in offices to reduce fatigue, the lamp will minimize the effect of all that radiation and beautifies surroundings of your work area, it improves your concentration and refreshes you by neutralizing the effects of an artificial environment. Use the lamp in waiting rooms to create a relaxing atmosphere, during massage therapy, and anywhere else you want to restore or maintain the natural air quality. The benefit of ionizers is well known. While most ionizers on the market are man made machines, the salt crystal lamp is a beautiful alternative of mother nature, without any noise and NO harmful OZONE!Click for Larger Image of a Salt Crystal Lamp in a Bedroom

Europeans have been aware of the HEALTH BENEFITS of salt for generations, and people suffering from chronic congestive problems go to clinics located in salt mines for treatment! It’s called SPELEOTHERAPY. The very dry, negative ion-rich environment of these salt mines helps to clear out the patients’ bronchial tubes and sinuses, and to kill bacteria and other microbes.

WE SUGGEST: Small lamp as a night light. Because the lamp is passive and not fan-driven, the radius of negative-ion output is limited. A large lamp is strongly “therapeutic” out to about ten feet, and the standard “medium” lamp out to about five feet. After that, the therapeutic effect drops off fairly rapidly. Because negative-ions are high-energy packets, their range of flight can extend out to several yards. The lamp should be considered effective only for the room in which it is located.

Salt Institute – The world’s foremost source of authoritative information about salt (sodium chloride) and its more than 14,000 known uses.