Chefs in many renowned
Restaurants are discovering a
unique way to cure, cook and serve
Seafood, Meats, cheese & Vegetables

The endless uses and benefits of GAMMA Himalayan Crystal Salt have reached a new dimension! New GAMMA Himalayan Saltware™ has many uses. The salt’s crystal lattice has a fairly high specific energy (energy per unit of mass), so it will tend to hold any temperature you bring it to for a good while. Also, due to its lack of porosity or moisture, the salt plates can be safely heated or chilled. They can be used as plates, platters, freezing slabs, curing bricks, and skillets. They can be heated in the oven to 400° for cooking or chilled in the refrigerator to be used as a serving plate. 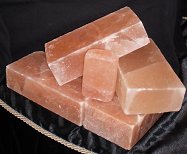 GAMMA Himalayan Saltware ™ are 100% Natural Crystal Salt, which is as pure & unpolluted today as it was millions of years ago, from the primal ocean (the source of life).

Millions of years ago when the formation of the Himalayas begun, the primal ocean was naturally dried up with the energy of the sun, as the mighty Himalayas were rising, over time with intense pressure and temperatures salt became crystallized. The higher the amount of pressure the more superior the crystalline structure will be formed. Alexander the Great discovered Himalayan crystal salt at the foothills of the Himalayas. In 326 BC, at age 30. The Battle of the Hydaspes River was a battle fought that year against the Indian King Porus on the Hydaspes River (now the Jhelum) in Punjab. The Kingdom of King Porus was situated in that part of ancient India which is now known as Pakistan. The battle was the last major war fought by Alexander. Although victorious, Alexander’s exhausted army mutinied and then refused to go any further into India.

Some of the injured soldiers along with their horses took refuge in caves at the foothills of the Himalayan Mountains. Here they noticed that the horses were licking the rocks. But after further investigation, the soldiers discovered that the horses were actually licking crystallized salt. Soldiers also notice that wounded animals were healed much faster in the salt mines. Since then, the locals have been using Himalayan Crystal Salt for their daily uses. Now the rough salt rocks are hand cut by local crafters into a variety of shapes, providing the foundation for extraordinary new ways to prepare and serve food. 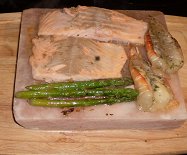 GAMMA Himalayan Saltware™ can be used as Sushi plates or slabs, they will cure and season foods when used cold. Arrange thinly sliced Carpaccio or Sashimi on a cool salt platter and serve. Watch as the food literally salt-cures while at the table, gently cooking the edges and bringing on just a smidge of mineral-rich saltiness. It can also be used for vegetables, cheese and some deserts. 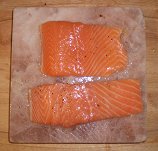 Before You Start cooking

Heat the brick or slab to 400° for 20-30 minutes (you’ll notice a natural whitening of its color). Remove the brick from the oven, Caution! It will be very hot. Set it on a heat-resistant surface. Lightly toss your fish, meat or vegetables in oil seasoned with herbs or spices, then place directly on the GAMMA Himalayan Saltware™. Cook your food to your liking.

Hot 7″x4″x2″ bricks hold their temperature for 15 to 20 minutes and 8″x8″x2″ plates / slabs retain their heat for up to 30 to 40 minutes. When the GAMMA Himalayan Saltware™ cools completely, (it may take hours) it will return to its original crystalline look.

Salt forms in layers therefore inclusions in salt products are a natural occurrence. Serving slabs have quite visible inclusions; therefore they should not be heated. Heating these slabs can be a cause for breakage. Use these slabs for serving cold items or for curing/ marinating.

Cooking slabs have very slight inclusions,they can be heated in the oven, when heated these inclusions will not damage the slab. These slabs are perfect for serving hot dishes.